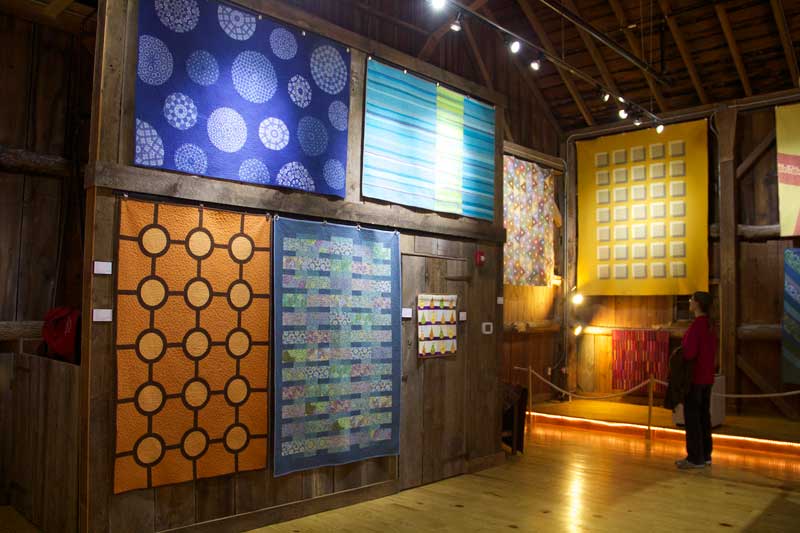 This is a story about friendship, hanging in there and blazing your own trail.

In 2002 we met Luella Doss. Luella had a line of fabric with Freespirit Fabrics as we did in the early days of that company. Luella saw us trying to convince shop owners that there could be room in the quilting world for a modern voice. She also saw a lot of people who weren’t open to the possibilities for a Modern Quilt Movement in the quilt world. We had just adopted our daughter Sophie, who still a baby and Luella graciously gave us one of her charming fabric chickens as a gift for her.

We continued to run into Luella at industry events over the years. A few years later Luella told us she was trying to raise money for a quilt museum in Wisconsin.

She told us that she had found a farmstead that she hoped to renovate to become a quilt museum. It seemed a massive undertaking and one that would take forever but we made a small donation hoping that her dream would reach fruition at some point. 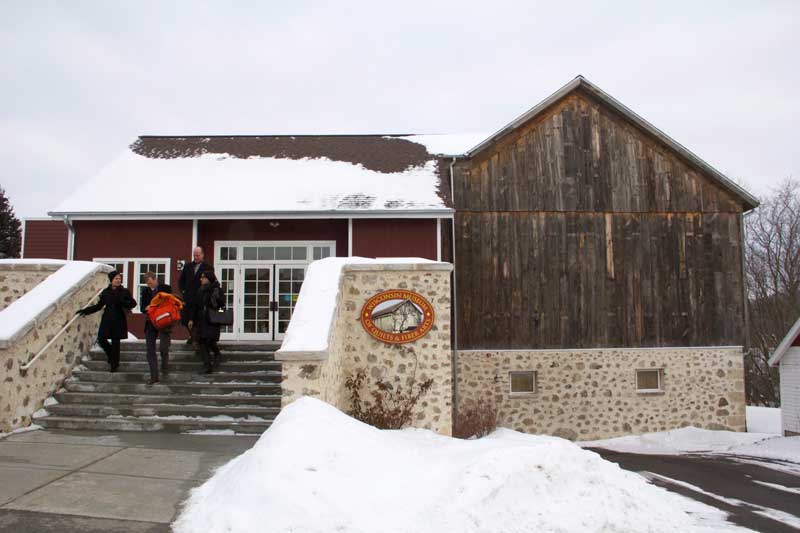 Several years ago we heard that Luella and her colleagues had indeed raised over $1,000, 000 and that the plans would become reality. 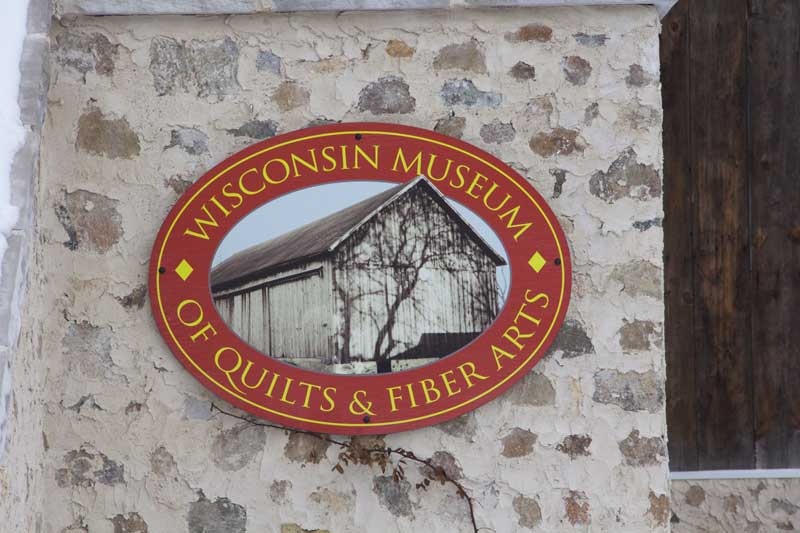 In 2012 I ran into Luella in Houston and she approached us about showing our work in a modern show at the museum which is officially The Wisconsin Museum for Quilts and Fiber.We interpreted that to mean that they wanted one of our quilts. Toward the end of 2013 we began to solidify plans and Luella and her co-curator Norma Klimpke asked for 30 quilts! We washed, steamed and rolled the quilts up at the beginning of January and Bill drove them to the museum. 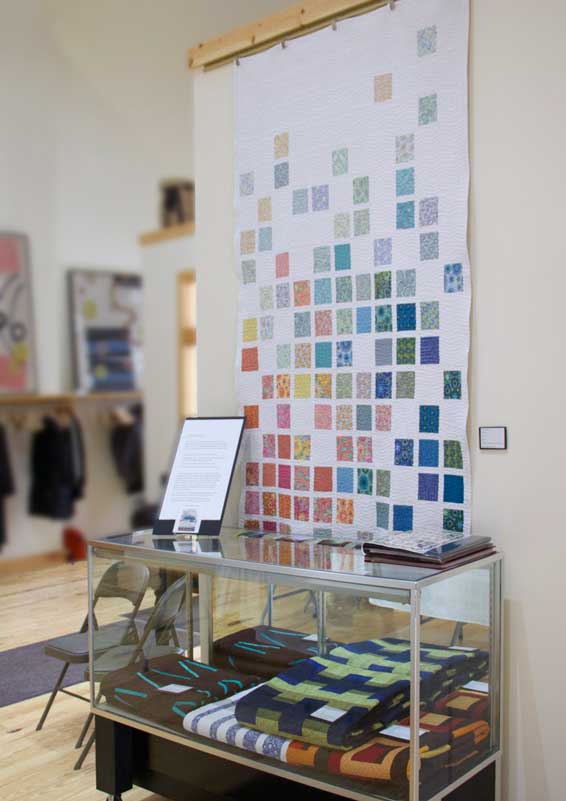 On Sunday we attended the Artist Reception where these photos were taken. It was wonderful to have time with Luella. A lot has changed in our lives since we first met 12 years ago. Sophie is now 12 and growing like a weed. Sadly, Luella recently lost her husband but she has continued to work with a wonderful group of people to create an amazing organization dedicated to our craft. The day before our event she had a reception for Nancy Zieman, who recently wrote an autobiography. 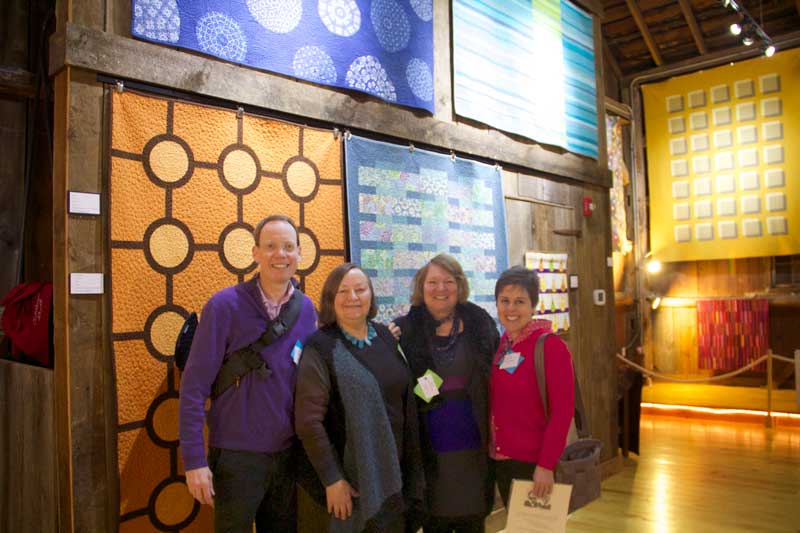 Bill, Norma, Luella and me

I thanked Luella for including our work in this show and she said, “I saw your struggles.” I knew just what she meant because I saw hers too. It seemed so ambitious all of those years ago to try to build this museum. We both know a few things about fortitude. The exhibit runs through April.

7 thoughts on ““I saw your struggles””

We have a limited number of kits for this new version of our Acadia quilt. This kit is the answer to the questions “What can I make for my father-in-law’s 75th birthday?” and “What do I make for my 12 year old granddaughter who dislikes girly-girl colors?” and “Do you have a quick and easy quilt for a boy heading off to college in the fall?” The dark inky-blue field fabric makes the neutrals come alive and is perfect for functional quilts that will be heavily used for dorm rooms, Netflixing and long naps on a snowy day. We used a handsome blue and gray plaid on the back and have a little yardage left if you too love a gorgeous and soft yarn-dye backing. Acadia is also available as a stand-alone pattern and as always, free shipping to US addresses. #modernquiltstudio #modernquiltstudiopattern #modernquiltstudioquilt #quilt #quiltsofinstagram #quiltsforboys #quiltsformen #quiltersofinstagram #modernquilt #easyquilt #beginnerquilt
We’re spending our afternoon helping to set up in the fellowship hall of our church an exhibit of quilts made by members of our church. The exhibit is part of an effort to share the gifts we bring to the community and the world. #firstunitedoakpark #quiltersofinstagram
We are totally booked for teaching for 2020 and almost fully booked for teaching in 2021. If your organization is interested in having us teach in 2021, January is the easiest time to book before we begin traveling for the year when the remaining dates fill quickly. On our website under the classes tab, you’ll find Booking FAQs. If you have any questions that we didn’t cover or want to ask about teaching availability, email sales@modernquiltstudio.com. We have a new contract template that makes it easy to expedite plans. #modernquiltstudio #quiltworkshop #travelingquiltteacher
“What size scrap do you keep?” is a question we’re frequently asked. We keep some scraps for teaching but also produce more than we can use. So we gather a trash bag of scraps together occasionally and drop it off at the children’s craft area of our local zoo. Preschools, community centers and other places in your community often welcome scraps to give even the smallest pieces of our favorite fabrics another chance to be enjoyed. Be sure to call ahead to make sure they are needed. #modernquiltstudio #quiltersofinstagram #reducereuserecycle #scrap #fabric #craftersofinstagram