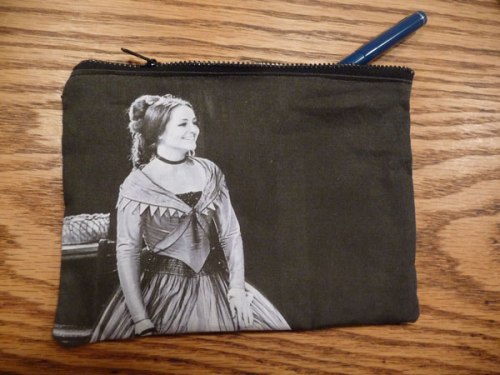 I’ve often bristled when people tell me that I’m “lucky” to have had a great  professional opportunity. Lucky to be born in a free country? Yes. Lucky to have met my husband? Yes. But I’ve often thought that work opportunities were more a result of hard work and preparation than luck. However, every now and then luck appears in the midst of hard work and no one can deny its role.

Several years ago my cousin Rebecca Ringle, a mezzo soprano opera singer was getting her costume for a production in which she was singing. Rebecca had long admired the famed mezzo Frederica von Stade and was stunned to find that she had been issued a corset as part of her costume with a tag indicating that it had been previously worn by Ms. Von Stade. I told her that was a sign of great things for her and that she should always remember what it felt like to sing in that corset.

Last December I had a series of phone calls with Rebecca, who by now was an understudy at the Metropolitan Opera in New York. Life as an opera singer is not always easy, especially when the economy of Europe is unstable. You work and work and work at your craft and you hope that the right opportunities will come. I wanted to make something for her that she could take with her to performances that would remind her of the faith I had in her. I decided that she needed to take a little bit of Frederica Von Stade with her to every rehearsal and performance.

I found an old photo of Ms. Von Stade at about the age Rebecca is now in a Met performance of The Barber of Seville. Rebecca had recently sung this role and it is such a beautiful photo. (Note: using photos taken by others in this way is permissible for personal use only and cannot be sold.) I decided that the photo would be perfect for a small pouch that she could take with her backstage for her post-performance makeup or jewelry. Bill and I used photo transfer fabric, a zipper from our stash and a dark fabric for the back of the pouch. I told her I hoped it would bring her luck and that it was the gift every opera singer needs to have backstage. I warned her that every other future Christmas present will pale in comparison to the lucky Frederica Von Stade pouch!

A few weeks ago, luck undeniably appeared during a rehearsal at the Met. Another mezzo singer couldn’t make the scheduled run of Die Walkurie in a role Rebecca had performed professionally before and knew well. Rebecca was given the role. “That just never happens,” she explained to me last night. “You have to take Frederica with you! She’ll bring you good luck!” I reminded her. She promised she would. Thanks to the live Met broadcasts I’ll be listening from Chicago to my cousin make her long-awaited debut at the Metropolitan Opera in New York today. Frederica would be delighted I’m sure.