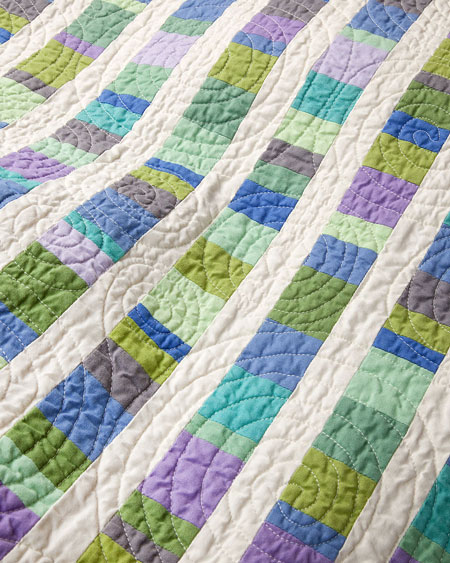 I got an email recently from a kind lady in Australia who was making the Beach Glass kit. She wrote to say that her strips were bowing and not coming out straight. She asked for some tips so I thought that I’d share my response to her. Having just completed a 9 foot long custom version of Beach Glass for a client, all of these tips are fresh in my mind (I assure you that they will be replaced soon by some other obscure tip that would clear the room if I decided to share it with non-quilters at a cocktail party). Not everyone appreciates a good sewing tip you know, however painfully figured out.

We encountered many problems on our first long strippy quilt our first year in business in 1999. We were making a version of our quilt “Ice Coffee” when we noticed that the strips were starting to arc to one side. After much debate we finally decided to start piecing with the walking foot instead of the #1 foot most quilters use for piecing. The logic is that with the #1 foot the fabric gets a tiny bit stretched as you sew because the top and bottom pieces of fabric are being pulled between the pressure of the presser foot and the tension of the feed dogs.If you are sewing blocks you wouldn’t notice the slight amount of stretching but the course of sewing a long strip it becomes apparent. When you sew all of those strips together, the bowing gets even worse.

The second thing we figured out was that if we alternated the ends when piecing the rows together that it would even things up. For example, most people would line up the ends of the strips and think of it as the “top” of the quilt. They would piece together all of the strips beginning at the top. We figured out that if we alternated piecing one set of strips from the top and the next set of strips from the bottom, that the bowing of one strip in one direction would be counteracted by the bowing of the next strip in the other direction (see diagram).

If you’re sewing placemats or something small, it’s not a big deal but if you’re sewing a bed quilt or a 9-ft long piece, believe me when I tell you that knowing this tip will save you massive amounts of frustration.