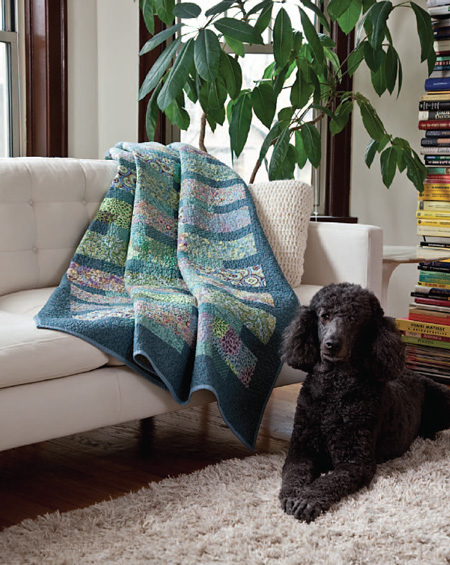 Since Quilts Made Modern was published last November, I’ve gotten a lot of calls and emails from people wanting to know all of the fabrics that are in our Fashion District quilt and others hoping to buy kits. Rather than continue to respond individually to questions about kits for this quilt and others, I thought that I’d explain the issue with kits and publications so you can understand just how complicated and expensive a proposition it is.

The problem with making quilts for books and main-stream magazines is that, unless we’re using solids which are always in production, the fabrics are no longer available by the time the publication is printed.  We have to turn in quilts 8 months to a year before the publication comes out and we’re usually planning 18 months to two years before the publication goes on sale. The lifespan of a fabric line is generally six months to a year. In the case of the Fashion District quilt, I collected fabrics for that quilt in April 2009, submitted the quilt to our publisher in October 2009 and it was published in November 2010. That’s two full cycles in the fabric design world. That’s not to say that none of those fabrics is on shelves of stores somewhere, but we cannot order most of them from manufacturers at this point. Even if I could track down all of those prints, it’s a pretty good guess that most would be out of print. I think that only one fabric in Fashion District — one by Kaffe Fassett– is still in print. He’s the only designer I know of whose fabrics are reprinted for longer than a year. Several of the fabrics in that kit are from our Wild Bunch line that hasn’t been in stores since 2009. We wanted to be able to sell it for more than a few months so we bought a ton of it but even we’ve run out of most of it.

This is a constant challenge for us. Magazine editors want us to use “current fabrics” but they often want the quilt delivered to them for photography 8-12 months before it appears in your mailbox. When we do have kits of printed fabrics, it’s because we’ve bought thousands and thousands of dollars of fabric, put them all in a dark storage room and waited a year for the publication to come out. But even then, we have no idea how many kits will sell and how many to buy for.

The classic story was in April 2007, when our Mendhi line was featured in our Spice Market quilt on the cover of American Patchwork & Quilting Magazine. We knew that it would be on the cover, notified the manufacturer (FreeSpirit) and were advised by the magazine to expect to sell 100 or so kits. We bought enough fabric for 150 kits just to be safe, or so we thought. We sold 32 kits the first day.  In the end we had requests for over 1,200 kits. At that time, FreeSpirit had just been taken over by Westminster. Westminster decided to discontinue the line even though we had orders in hand for 600 additional kits and were willing to buy any fabric they reprinted. They were not willing to reprint and 600 people never got kits. Four years later I still don’t understand why they made that decision.

So as much as we would love to kit everything, it’s pretty much impossible given the length of the printing cycle and the short shelf-life of fabric. The only suggestions I have are to look for colors and values that accomplish what the original fabrics have done in the quilt and to shop at a variety of quilt shops. That main blue-gray fabric was a Thimbleberries, I think. Some of the fabrics you would expect to find in a more traditional shop and others you’d find only in a shop that carries more modern fabrics. The trick is looking beyond the actual print and the way that fabric might be grouped in the shop to see the role that the fabric performs in the quilt. Those tone-on-tones that might look boring to you in a Civil War reproduction quilt are the perfect foil to those modern larger-scale prints. It’s all in looking at the hue and value, not necessarily the way it might be presented in the shop.

12 thoughts on “why no fashion district kits?”