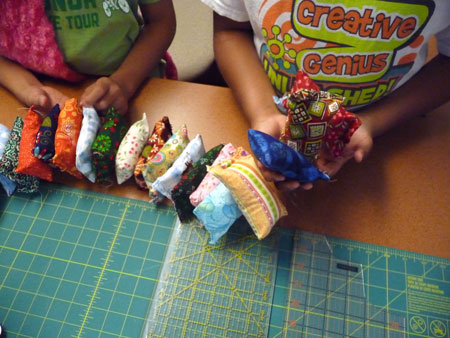 My favorite advice columnist Amy Dickinson, of Ask Amy, is asking families to leave a book — new or used — on the bed of every child in America on Christmas Eve so that each child will have the first present they find be a book. I’m in. All four of the kids who will be sleeping in our home on Christmas Eve will be waking up with books in their beds. New tradition — done.

So now here’s my idea for another tradition that I’m hoping will catch on. I’d like for people with some kind of hand skill to share that skill with a child or young adult sometime over the holiday season. True, I’d love to see some new blood in the handcraft movement but it’s really more important than that. I’m really getting concerned about the lack of fine motor skills in the some of the young people I know. I’ve seen it in interns in our studio, workshops I’ve taught, our daughter’s school and in various orbits of my life.

I see it in kids who can’t use scissors or grasp a pencil correctly. I see it in children who can’t write in cursive and in young adults whose handwriting looks like mine did in 7th grade. I’ve seen it in interns who can’t cut fabric accurately or use pins very easily because they aren’t used to grabbing anything smaller than a computer mouse. They are texting whizzes but they struggle with activities that use more than just their thumbs. Our daughter wasn’t even taught cursive in school and teachers are encouraging students to do all of their presentations in PowerPoint so they don’t even get a chance to use block handwriting for presentations. Even a young surgeon I know admitted that the women in his residency program who did handwork as young girls have better hand skills than he does. I have these images of our species losing millions of years of evolutionary progress because our fine motor skills are succumbing to atrophy. I’m all for teaching and knowing technology but developing fine motor skills can’t be totally thrown out the window.

So I’m calling on those of you who can quilt, knit, bead, crochet, tat, draw, paint, needlepoint, cook, make furniture, ceramics or anything that requires hand control to share that skill with someone for a few hours between now and New Year’s Day. Invite a young person to help you with a project or better yet, share your materials and skill to help them make one of their own. We’ve had sewing playdates on days off where we invite one of our daughter’s friends to spend the day in our studio with a pile of scraps, scissors, pins, needles, thread and a spare sewing machine. We offer guidance but let them sew whatever they want as long as they are respecting the equipment. Even if they use the sewing machine, they have to pin and cut so they develop some new hand skills. What I’ve found is that pretty much all you need to do is provide the time and materials and they will figure out what they want to do pretty quickly. The photo above is our daughter and her friend who made dozens of tiny pillows that they strung together in a garland. This was for a school art project but they routinely sew sleeping bags for stuffed animals, cloth napkins and miscellaneous sewing projects. We’ll be working on knitting projects and constructing and decorating gingerbread houses over the holidays as well. I figure that as long as they’re using their brains and their hands in new ways, it’s all good.

13 thoughts on “giving the gift of hand skills”