Before I tell you about Cowalunga 2010, I want to tell you lovely Craft Nectar readers how honored and humbled I am by your GENEROUS contributions to Respiratory Health Association of Metropolitan Chicago for the Deep Breath quilt pattern in the last post. I wish you could have seen me sitting a my computer when a new contribution would come in with my hand on my heart sighing, “Ohhh..” I occasionally had to wipe away the stray tear and thought more than once, “How will I tell them how much this means to me?” I just can’t.

Onto the ride. Day #1 began with a comedy of errors. I filled up my Camelback as I was heading out the door and unbeknownst to me it developed a leak and emptied itself all over the mudroom floor. Nice. Then Bill inadvertently put my overnight bag on the equipment truck before I had taken my asthma medicine out of it – before a 65-mile ride. So I had to unceremoniously turn around a few miles from the start and ride back. Yes, that was me running like a crazy asthmatic after the equipment truck screaming, “Wait! I need my medicine!” Happily for me they stopped. Then, Sophie, who is never sick, had woken up with cold the day before and, while phlegmy, insisted that she could ride. It’ll be a miracle if we actually make it through this day I thought. 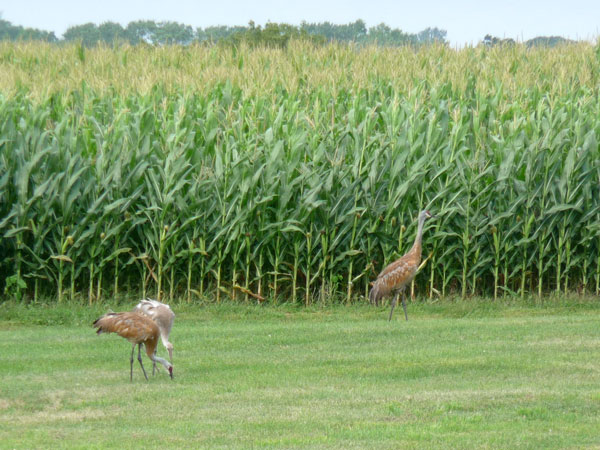 We saw some of the usual cows along the way but also, Sand Hill Cranes, of which I have become extremely fond since moving to the Midwest 14 years ago. They are taller than I am and have a 6ft wingspan so you can’t miss them in flight or eating next to rows of corn. Over the two days I spotted 19 of these majestic birds, usually in pairs or small groups. You can even see the teenage one without the red head who I’m guessing will take his first big migratory trip this fall. Fly safely little guy!

Meanwhile, our Sophie was making the biggest ride of her life so far. Although not riding as strongly as usual on Day #1, she was good humored throughout the ride and even stood up to climb the hill known to the Wisconsin locals as “Killer.” One young couple, who were part of Cowalunga, were walking their bikes up Killer. They actually stopped to applaud us pumping our way to the top. Sophie was a champ! I felt great at the end and even thought, I could easily have ridden another 35 for a century today. While I was busy congratulating myself for having trained so well, a big storm was headed our way that would make Day #2 the most challenging day of biking I have ever had.

The morning of Day #2 started out cloudy and cool. As long as it stays dry, I thought. Before we left the forecast was only for 40% chance of rain. We had packed on our bikes rain gear and a microfiber towel in a bag just in case. The rain began gradually and then turned to a full-blown thunderstorm. I was too worried about our camera to even take it out of the waterproof bag to capture it. I looked for shelter when we spotted lightning but couldn’t find any, short of knocking on someone’s farm door.

We decided that the lightning was far away so we’d press on for the rest stop 15 miles away. I was worried that my brakes weren’t working well in the rain and that the pavement was slick and dangerous, especially given the hills. When we got there we were soaked. Sophie’s teeth were chattering and her lips were purple. “I think I’m done,” she said. I looked at the radar on someone’s iPhone and asked her if she wanted to take the Support and Gear (SAG) van along the route until the rain stopped. She and Bill agreed that was a good plan. I was devastated not to be able to ride the whole thing but I didn’t feel safe in so much rain.

We got in the van and I was holding back tears of disappointment for having trained so hard and long, but I just didn’t feel safe not being able to brake well in heavy rain and with lightning. We rode a few hundred feet in the SAG van and I saw a glimpse of light in the sky and the rain miraculously stopped. “I’m getting out! I’m riding!” I proclaimed. Bill said that he wanted to give his knees a break and that he and Sophie would skip a portion of the ride and head for drier and sunnier sections of the route. He knew that I needed to ride for so many reasons and wished me well. “See you at the Finish,” he said with a kiss. There were no other riders in sight. I was on my own. SAG vehicles would be patrolling the route but I knew that I would be riding alone for several hours.

The headwinds were up to 30 mph and at times I could barely keep my little bike and my 5’ tall body upright. I normally ride 15 mph on flat areas yet I was riding 5.5 mph on the flattest areas and in the easiest gears. It was brutal. The rain was gone but the winds and the steep, relentless hills were exhausting.

At some point I looked up and saw a sliver of blue sky. Ride toward the blue sky, I thought. Then a voice in my head said, That’s all I want. Blue sky for those of us with lung disease. Blue sky means no one else spends a lifetime gasping for breath. No one else loses a loved one to a smoking-related illness. Lung cancer stops killing more people than breast, prostate and colon cancer combined. That’s blue sky for me. That’s why I’m out here riding alone through corn stalks swaying in the wind. I’m riding for blue sky. I’m riding for all of those names on the back of my bike who would like a little blue sky of their own. I cannot stop. I just can’t. I can’t write a big check. This is what I can do. At the end of 133 miles, I was exhausted but proud of my almost-49-year-old-asthmatic self.

It turned out to be the hardest day of riding I have ever experienced and far more tiring than my 100-mile ride a few years earlier. Sophie and Bill ended up getting out of the SAG van about 15 miles ahead of me where the sun was out and there was ice cream. (Sophie really needs a bike jersey that says “Will ride for ice cream!” Machine embroidery perhaps?)

Thanks again for making my ride so meaningful to me and to all of the people whose lives will be better as a result of your donations. If you haven’t donated yet and want to download the pattern, you have until Sept 10.

You, my friends, rock.