Around here my daughter Sophie and I are already planning our April Fools pranks. Bill never remembers the date (even though it’s his sister’s birthday) so he’s always on the receiving end of our pranks. My daughter and I have different pranking styles. I go for one great gesture and she wants to fit as many in a day as possible. As a result, April 1 has become an exhausting day, even for a veteran prankster like myself.

Sometimes it’s things in shoes or hiding all shoes. Then there’s the hiding of one of every shoe. That’s a good one. Other times it’s hiding things in the bed or messing around with the food. One year I swapped out the orange juice for the milk and vice versa. In his drowsy morning state, it took Bill a good 15 seconds to figure out what was going on. He kept looking at the labels on the cartons and what was in the glass. I had to leave the room because I was trying so hard not to burst out laughing.

Over the holidays we played a family board game in our pajamas to determine who would have to make the beds. Bill was, Sophie and I thought, just a little too competitive and won. So when he jumped in the shower we replaced all of the underwear and socks in his dresser with Sophie’s stuffed animals. The stuffed-animals-for-underwear swap is a perennial prank favorite at our house.

Last year I developed my favorite new prank and I’m sharing it with you in early March so you have time to make the necessary preparations.

an x-acto knife or box cutter

Here’s what you do:

Find where the UPC code meets the crimped edge of the package. This is the best place because it’s the least noticeable. 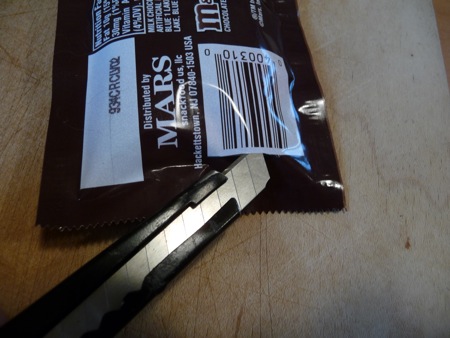 Using the x-acto knife, make a small slit in the back side of the package. The slit should be as small as possible but big enough to get the M&Ms out. Last year’s M&Ms were packaged in plastic-coated paper bags, which ripped less easily and were ideal for this prank. This year the packaging seems to have changed. Now the bags seem to be made out of a plastic that rips very easily. If the opening splits wider than you planned, just use a long piece of tape and carefully line up the tape so the opening closes neatly. 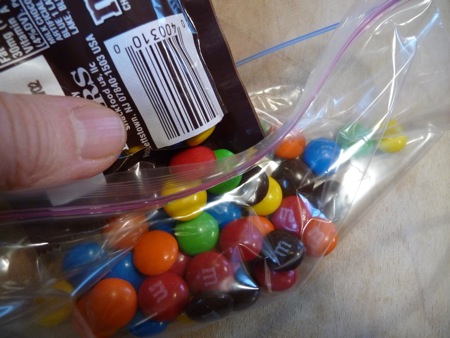 Carefully cut a piece of double-sided tape the length of the slit. Cut the tape in half lengthwise and discard one half. As neatly as you possibly can, place the remaining piece of tape on the inside of the bag so that the package reseals as cleanly as possible. If you’ve done this very carefully you won’t see the slit at all. 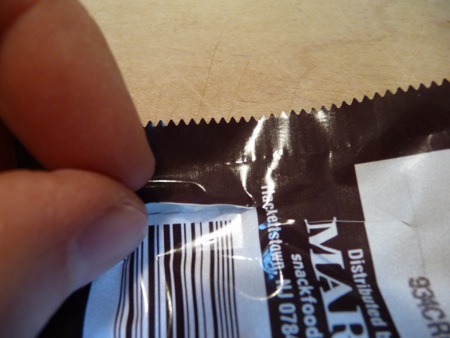 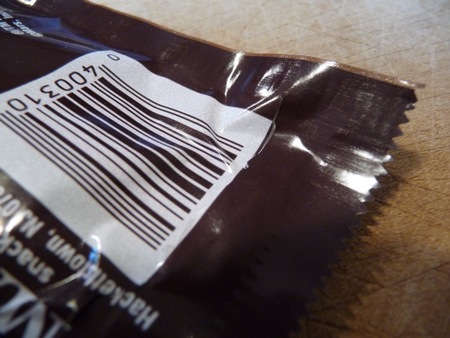 Here’s the preferred strategy: leave the first trick bag on the counter where a child will find it. I promise you that after the kid discovers the prank he or she will want to prepare another bag for someone else. After all, being on the inside of a prank can sometimes be even more fun than being on the receiving end. After the prank-ee discovers that there are beans instead of candy in the bag, I give them the candy that I’ve set aside in a small plastic bag.

It’s hard work coming up with new pranks every year so please leave a comment if you have any new prank ideas for me for this year. And be sure to watch this space on April 1.

14 thoughts on “my favorite April Fools prank (of late)”